The crew slept well and met at breakfast. To be served at table was a treat and the cost of £1.20 each for a full cooked breakfast brought smiles to all concerned. Afterwards Flt Lt Phoebe Rossiter collected the crew and took them back to the aircraft.  Crew Chief Shaun Jarvis was soon busy removing covers and gust locks. Rod and Jeff went off to deal with the paperwork. Although the morning started fine the forecast for the day was not promising according to the Met Officer at RAF Leeming.  The aircraft was refuelled and then it was time for some public relations activity. First Jeff entertained some local nursery school children before the Airplay team arrived. Airplay is part of the RAFBF activity for children on RAF Bases. Meanwhile Shaun ensured the cockpit glass was clean. 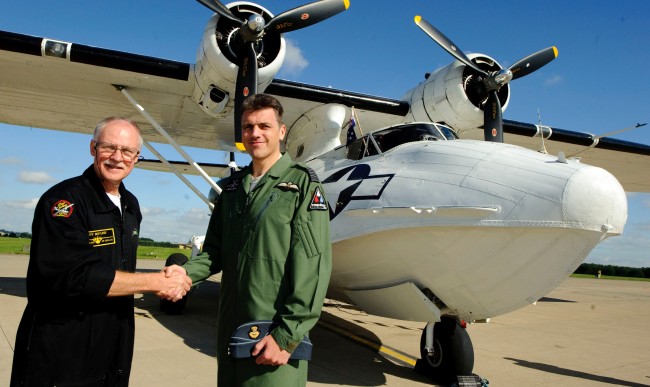 Leaving RAF Leeming Group Captain Steve Reeves and Flt Lt Phoebe Rossiter were there to say farewell.  With Jeff flying the Catalina departed on time and headed to the racecourse at Redcar before turning north.  As previously mentioned the forecast was not great. An orbit at Seaham where Hawker had put down was abandoned due to low cloud.  Beadnell was spotted through a gap in the cloud and an orbit was made. The further north the crew flew the worse the weather which was not something that had troubled the two Harry’s in their Sopwith Waterplane back in 1913.

Heading further north, RAF Leuchars was covered in fog as was Montrose, the latter another place Hawker had landed at.  By this stage the left PTT radio button had failed so Rod took over the flying while Jeff dealt with the radio and navigation issues.

The Catalina is CAA certified for instrument flight and both pilots were suitably rated. Approaching Aberdeen the plan of flying a display over the sea just north of the harbour followed by a flypast at the airport was reviewed and abandoned.  In 1913 the Control Point was the Palace Hotel and although no longer in existence the City Council had provided sponsorship and not to have done something would have been a great shame. Furthermore, Aberdeen is the home of the world’s only surviving WW2 VC holder (John Cruickshank, 210 Squadron Catalina 17-07-1944).  ATC knew the score and came to the rescue by clearing the Catalina to 4000 feet and putting it in a wide downwind pattern while the busy North Sea helicopter traffic was dealt with.  Cleared to the ILS the Catalina broke through at about 900 feet and Rod continued for a missed approach.  During this, the coast became visible off to port which allowed a turn towards it and with great relief the air display was completed by Rod.  Alas, given the weather no videos appear to exist of the display.  Strangely, Jeff has never found any photographs of the two Harry’s and the Sopwith Waterplane visiting Aberdeen. It was then back into the murk for Jeff to follow the coastal routing north to Peterhead and Fraserburgh!

Flying across the top of Aberdeenshire brought back thoughts of what it must have been like for the two Harry’s 100 hundred years ago.  It would have been even more remote for them.  Moving forward 30 years, thoughts also turned to Coastal Command as the Catalina passed Banff,a Strike Command base in WW2, on route to RAF Lossiemouth. The crew knew the airfield was there and re-assuringly for Jeff the runway became visual on base and the Catalina landed and taxied in to the welcoming party. 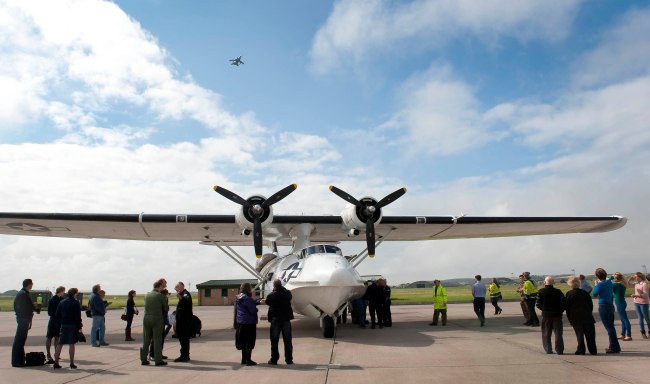 The local RAFBF team lead by Karen soon had a banner up and photos taken with the pilots.  Later Jeff was busy with Group Captain Ian Gale laying a RAF wreath at the base memorial. This was done in memory of John Watts, a founding member of Plane Sailing Air Displays who was tragically killed in a random mid air collision of two Tornados. 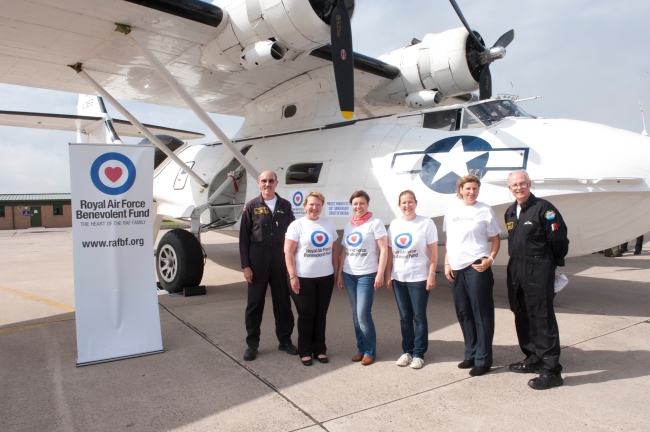 It was soon time to say farewell and continue with the second sector of the day plus another display.  Once again the RAF had been most welcoming and helpful.