The crew stayed overnight with Wing Commander Phil Lamb and his family. Batteries recharged after a restful night and an excellent breakfast, the crew headed back to the aircraft driven by the Station Commander himself. Crew Chief David Legg supervised refuelling prior to the crowds rolling up to the Classic Air Force so as to see inside a special visitor, “Miss Pick Up”. They were an interested lot with plenty of questions for the crew. It was amazing how the time whizzed by and soon it was time for the pilots to strap in and start going through checklists. Before doing so Wing Commander Lamb and his family as well as Flt Lt Spencer were thanked for their hospitality. 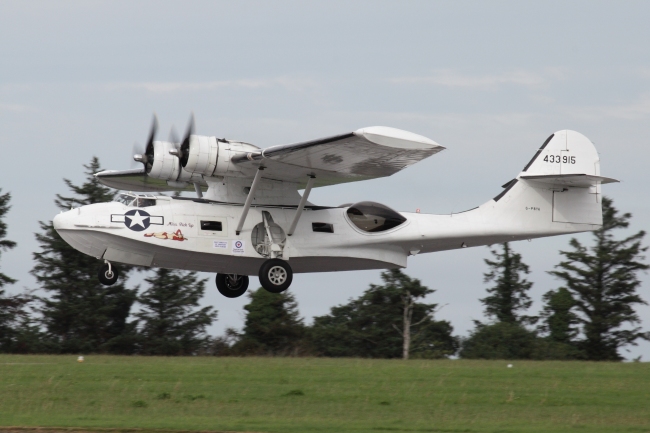 Departing at 1300 it was a case of keeping to schedule. Jeff flew the departure and started a climb to port so as to run down the coast to Lands End flying at 700 feet. After that waypoint and turning west it was a case of heading for the only Control Point of the sector. The two Harry’s did not get the chance to land at Falmouth but the Catalina Crew were keen to put on a good display.

The Catalina arrived at Falmouth at the time indicated on the schedule. Jeff flew up the estuary and then turned to port to come back past Mylor and Flushing. Dropping down abeam the Royal Cornwall Yacht Club, the 1913 Control Point, John then took control for the air display. This was over the sea between Pendennis Castle and Pennance Point. Here are a couple of clips of that. http://www.youtube.com/watch?v=BQ3WKazhOow and http://www.youtube.com/watch?v=415uFN4P7KA&feature=youtu.be

Display completed it was back to the coastal journey past Dawlish and Poole. Weather conditions had changed by this time and the crew were dealing with a 20 knot headwind and mixed weather. John’s skills as a navigator quickly analysed the situation and the throttles were pushed forward to maintain ground speed. 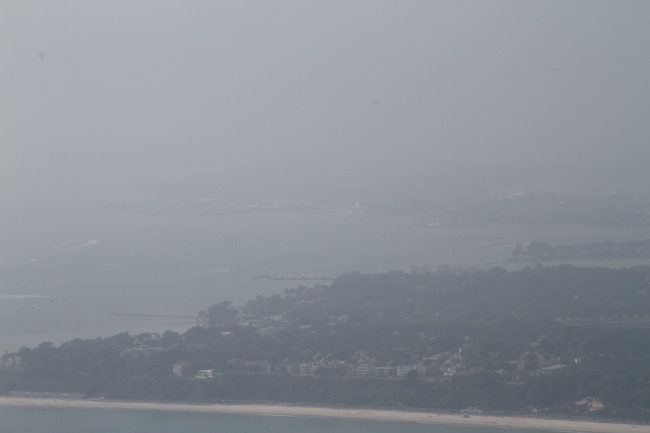 The headlands around Poole were covered in patchy cloud but the Catalina was able to fly along the shoreline of Poole Harbour, well known for its flying boat history. Shortly afterwards and despite the haze, a camera ship flown by Jon Butts and with Karl Drage behind the camera came alongside. It was planned to do some more air to air shots as the Catalina flew past the Needles and the southern coastline of the Isle of Wight before heading up Southampton Water. By this stage Solent Radar and then Southampton ATC were providing a very helpful service to both aircraft.

The original finish line was at Netley on Southampton Water and an orbit was flown. It was felt that the Circuit of Britain had now been completed albeit 100 years after the attempt by Harry Hawker and his mechanic Harry Kauper in the Sopwith Waterplane.

However, there were still some tasks to be completed by the crew before arrival back at Duxford. First, Southampton requested a flypast which was done.

The next priority was entering the London TMA on time.  By this stage John was flying while Jeff navigated and spoke with Heathrow Special. Remember, John’s PTT radio switch was still broken! Cleared to enter Class A Airspace at Brooklands, the Catalina then turned on to an easterly heading. From there it was clear to see that Heathrow was on easterly departures meaning there was a known airspace conflict with the standard instrument departures flown by Heathrow traffic. Would Heathrow Special grant permission for the flight at 1000 feet over Hook and Kingston? 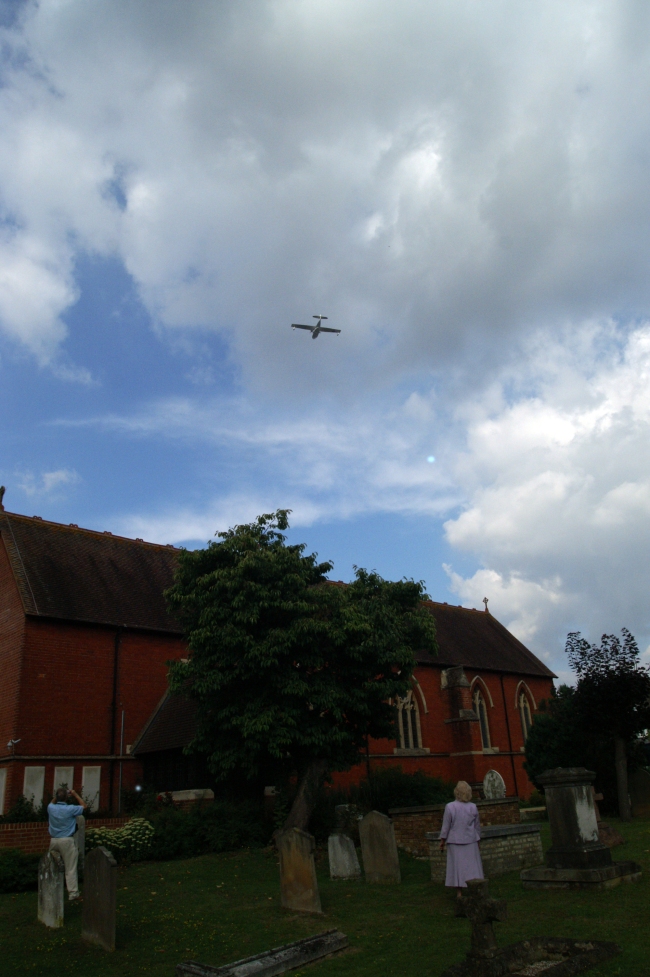 Yes! Passing Hook floats were lowered for Hawker and the watching crowd at St Pauls Church, his last resting place. Next a turn to starboard onto an easterly heading. It was obvious that NATS had come up trumps with a “Check All” as the 70 year old Catalina banked over the Sopwith building in Kingston.

Continuing on, the Catalina climbed to be above 1400 feet. Even so G-PBYA still passed below the top of the Shard and then flew over Tower Bridge. Heading north over the Lea Valley towards Brookmans Park VOR brought the home straight into view. John passed control back to Jeff for the short flight back to Duxford. After a smooth landing the welcome from the crowd was overwhelming. Five days and over 1800 nautical miles later it was a case of “mission completed” for the Project Hawker 2013 crew. It was all smiles for pilots John Warman and Jeff Boyling ably supported by Crew Chief David Legg. Standing either side of David were the welcome ground crew party of Baz Stead and Crew Chief Shaun Jarvis. 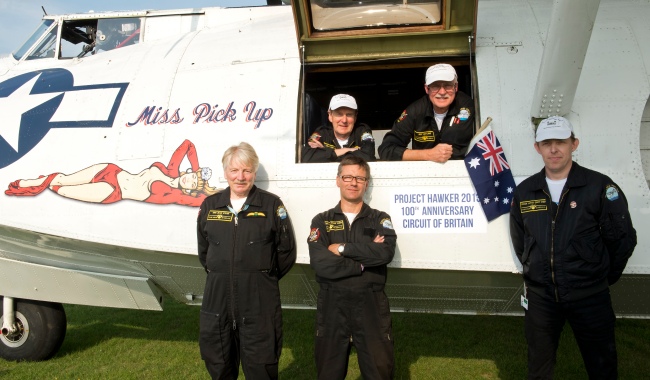 On reflection, it was absolutely fabulous to have completed the Circuit of Britain Race 100 years after the attempt by a fellow Aussie, Harry Hawker, the man who gave his name to aviation.  It would not have been possible without the help of many along the way. A special thank you to the following: CAA, NATS, Esther Blaine (IWM Duxford), Mike Neville and his RAFBF team, RAF Leeming, RAF Lossiemouth, RAF St Mawgan, the flight and ground crew of G-PBYA “Miss Pick up” and all those who sponsored the flight. An extra special thank you to the close support team of Jeff’s wife Liz, daughter Emma and son Alex.

The RAFBF and IWM Duxford were the chosen charities and fundraising increased their reserves. To read more about this historic flight, the 1913 attempt and support the charities go to www.projecthawker2013.com . 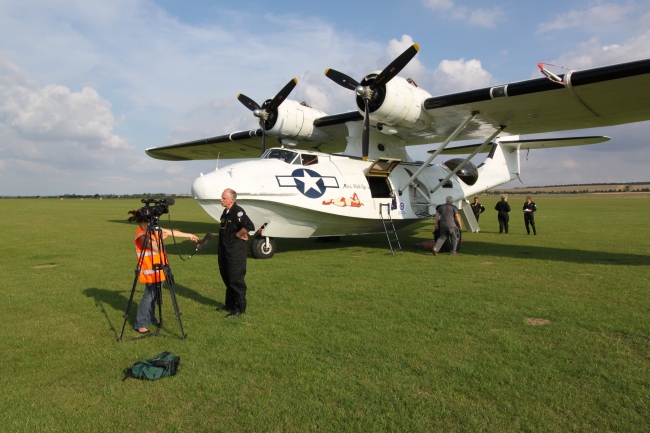 Another but not the last interview for Jeff!